Most of the pictures from the actual System76 portion of my trip were included in Part One. This post is going to be much less exciting. It’s primarily just pictures of the food I ate and stuff I found while roaming the streets of Denver. That said, I do want to comment on a few pictures that System76 posted on their blog about the event. 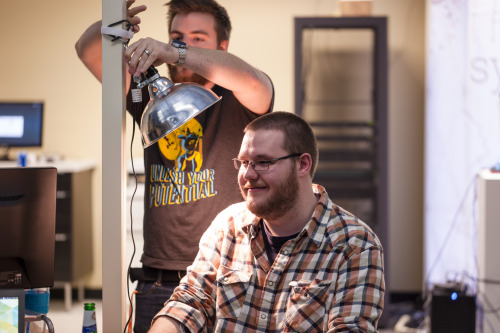 Photo property of System76. For some reason, I find this picture absolutely hilarious. Here, Cassidy is turning the heat up trying to put pressure on me for my ‘Human, Robot, or Cyborg’ test. I’m trying to play it cool and look smug, but I end up looking… grumpy? Confused? I don’t know. Either way, comedy gold. 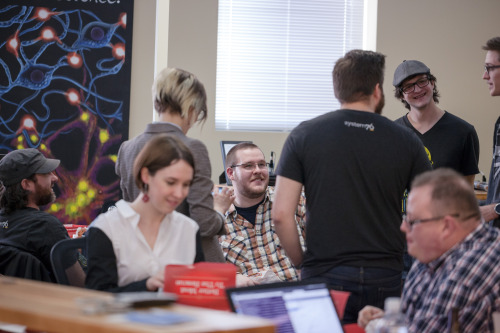 Photo property of System76. I really like this picture of all of us hanging out and enjoying each others company. That’s really what the whole event was about.

Friday night I went to Sliceworks, which I had heard great things about. The pizza was phenomenal, and you can’t beat the value- ~$5 for a slice of pizza and a cold beverage.

Taking the light rail back into Denver. I love how great the public transportation is in Colorado.

So, that’s a thing in Denver.

Okay, so story time. I spent a good part of Saturday exploring the 16th Street Mall. I had set aside $30 for a nice meal while I was in town, but I didn’t really know which restaurant I should go to, so I decided I would keep walking and eat at the first one whose name made me laugh.

That was when I stumbled upon The Tilted Kilt. I had never heard of it before, so I just assumed it was just some local Denver restaurant. I looked up the menu online and saw that they had lots of stuff I would eat, and that the prices were affordable, and that it had good ratings, so I decided that would be my lunch of choice.

I swear, I had no idea that the staff wore these uniforms:

I felt like an incredible pervert / misogynist the entire time I was eating. That was, until they brought out this beauty:

That was, without a doubt, the most delicious meal I’ve ever had in my life. It was incredible. The ribs were heavenly and the fries were the perfect mixture of crispy and floppy. I cannot recommend it enough.

As I was walking back to take the light rail to Englewood again, I heard street musicians playing jazz music. What a perfect way to wrap up my time in Denver. That night Cassidy and Katie cooked a really amazing dish for me, then we spent the evening talking about elementary and laughing about Avi Romanoff’s amazing YouTube videos. The next morning, Cassidy made me a caramel latte, then I hailed an Uber and ran off to the airport. I could not have asked for a better trip. Thanks to everyone who made it rock.