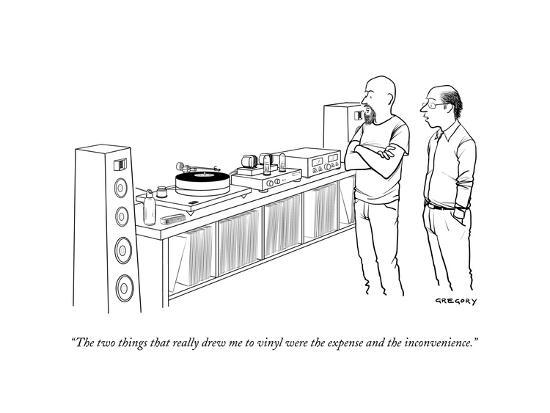 I think there’s a fair bit of truth to that statement, and what’s interesting to note is that the people who prefer physical copies of books aren’t wrong or incorrect, they just approach the activity in a different way. I myself do a mix of both: in terms of pure convenience, my ereader lets me get through books way more quickly. I always have my library with me, so I can read any time, plus it has features like a backlight so I can read in bed at night. That said, whenever I want to support the author more directly, or if I want something I can keep on my shelf to leaf through from time to time, or if I want a physical edition because I find it aesthetically pleasing or it is better suited for a physical format, I go and pick up a physical copy of the book. At the end of the day it’s the same text, but a different way of interacting with and experiencing the content.

I see vinyl in much the same way.

I woke up this morning to a series of Tweets that my friend Cassidy wrote about his recent experience with vinyl and how he saw it fitting into his life, and I wanted to take the opportunity to jot down some thoughts I’ve had for a while about vinyl. I’ll start off by saying that, generally speaking, everything Cassidy said is 100% correct. Vinyl does take up a lot of space, it’s expensive, it’s not portable, and it doesn’t accomodate playlists at all or individual song playback very well. That said, some of those complaints are actually features, not bugs, and some of them require coming to it from a different angle.

The simple truth is that vinyl isn’t for everyone, and that’s perfectly okay.

Right off the bat, let’s get this out of the way — if you say to yourself “I want to listen to {song name here} right now,” a vinyl record is a terrible medium to use to accomplish the goal. Finding the track isn’t too difficult, but if you want to jump around to particular songs, it’s a miserable experience. And forget playlists! That’s just not going to work. There’s a reason why I maintain a (arguably entirely too big) local music library (125GB in size at the time of writing — FLAC files, naturally. I am a format snob after all). There are days when I just want to hear Celine Dion’s My Heart Will Go On or Britney Spears’ Hit Me Baby One More Time, and I ain’t buying a record just to listen to those single songs. Even if I owned the record, I’d still probably hit play on my music app and accomplish the goal of hearing the particular song way more quickly and easily.

The biggest misconception I want to get out of the way is that vinyl does not more accurately store music than a digital file. I actually have a lesson about this in my AP Computer Science class each semester as a way to teach how computers store sound in the first place. Yes, it’s true that vinyl is an analog format so it “carves out” the analog representation of the original sound wave, but the fact is that a 24-bit 192kHz lossless audio file is a much more “correct” copy of a song than one carved out in plastic which then gets worn down with dust and vibrations and just as a byproduct of listening to the darn thing. It’s something the vinyl community needs to just accept - vinyl does’t automatically sound better, and the audio isn’t necessarily a higher quality than a digital file. Often, it isn’t.

So we’ve established that vinyl is more expensive, doesn’t necessarily have a higher quality, is cumbersome, is succeptile to wear, requires maintenance, and is a lousy way to find a particular song you want to hear. It also isn’t portable — you can’t take it with you as you go about your daily life, and sometimes you can’t use it at all. When I had my tib/fib fracture at the start of the year I couldn’t live on my own for several months, and even when I could, I couldn’t get up and down to flip a record over when it got done playing a side (oh yeah, I haven’t mentioned that yet — every album is, at best, split between two sides which require flipping half-way through).

So who in their right mind would purchase and use vinyl records?

Vinyl’s not about solving the problem of storing music efficiently and playing back music right when you want it — vinyl is a romantic way to interact with music because it’s so damn stubborn and inefficient.

A lot of people are disillusioned with the current relationship they have with music. They feel no connection to it. They open an app, type the name of a song, see a 200px-squared thumbnail, tap it, and instantly hear the music. It’s too easy. There’s too much. How do you find the good stuff in a sea of endless options (don’t say algorithms — but that’s a rant for another day)? And the version of the song that you hear is the same that every other person who taps the song in the same app hears — literally, it’s the same copy. You might pull it down from a different server than other people using the same app depending on geographic location and redundancy and things like that, but if you ran a checksum on it the file itself is identical to everybody else’s (I get into arguments with myself on if I think that’s actually awesome or terrible).

Vinyl is the opposite of that. You have to go out into the physical world, go to a store filled with these things (or at least with a few crates or shelves of them), manually flip through them all, and find what you want to listen to. You have to hand them to a clerk and exchange money for them. You put them in the car and take them home. You have to brush them. Sometimes you have to give them a bath. When you want to listen to it, you hold the album in your hands. You appreciate the artwork. You read the liner notes. You slide it out of the sleeve, carefully lay it on your platter, give it one final brush, flip a switch, then gently lay the tonearm down on it1. Is there any more satisfying tangible interaction in the world?

And there is no such thing as listening to one song. With vinyl, you’re in for the long haul. You start at track one and end at the last track. You go on the entire journey and get the full experience of the album, start to finish. I know that isn’t what you always want to do, but a reason why a lot of people get into collecting and playing vinyl records is because they feel like they don’t listen to full albums anymore. They’re accustomed to just throwing on an algorithmically-generated playlist and letting it run in the background. If you don’t feel like that’s a problem you have, vinyl really might not be the right fit for you — and that’s good!

I have found that when I listen to a record I focus on the music much more than any other medium. I don’t get distracted with a notification or something else. Nothing is vying for my attention. The entire experience is much more pleasurable and visceral. I put the record on, and for the next 30+ minutes I’m just sitting back and letting the music wash over me. I don’t have to interact with “technology” if I don’t want to. I can kick back, drink a cold one, and prop my feet up. And doing it this way I form strong attachments and memories to the music. I remember buying an Arcade Fire album to celebrate graduating college for example, or listening to a particular Mumford & Sons record over and over again when I started living in my house, or hearing Dark Side of the Moon on vinyl for the first time one Friday night. These are all great memories I have of the music.

And what’s cool is that my copy of the record is different from every other one in the world. There might be a particular defect in track 2 on side A where the album skips or pops, but nobody else’s in the universe skips or pops exactly that way in exactly that place. It’s my copy of the music. And you get to where you look for that particular pop or crack. The imperfections become things you enjoy and appreciate. It becomes a part of the music. When it isn’t there, you miss it.

I especially like buying used records. I like to think about where they came from. Is the original owner still alive? I wonder what all happened while the record was spinning. How many people listened, and what were their lives like? I bought an old jazz album from the 30s recently (by that I mean two years ago). Very well used. The cover was crinkled and yellowed, the plastic of the vinyl thin with a very distinct smell. Imagine the life this thing had! Oh, the stories it could tell.

Should I ever tire of a particular album, I can legally sell it or give it away, and more often than not recooperate my original investment.

And one day, when I’m dead and gone, somebody will be listening to my albums. Maybe it’ll be my kids, or at least my niece or nephews. They’ll hear the music popping and cracking, and think back to listening to it with me, and spare a thought for poor old Uncle/Papa Nathan. Or not. Maybe they’ll sell it and it will live a life with a new owner. That’s a nice thought too.

So bottom line, vinyl is entirely about the experience and having a more tangible, deliberate interaction with your music.

And yes, it is expensive, but I know that when I purchase an album (especially if I do it directly from an artist’s website) I’m directly supporting the artist financially, which makes me feel good. A band or singer makes way more off of one direct vinyl album sale than they do if they earn a commission because I listen to their song 10 times on Spotify. That’s how I justify enjoying digital copies of music that were obtained using… let’s call them, “unsanctioned methods.” Even if a copy of the album miraculously shows up on my hard drive, I make it a point to purchase the music if it’s a band I want to support, and in the end everyone still ends up making more money and enjoying the music. It’s a win-win.

It all comes back to my original statement. Digital music is more convenient. It’s cheaper. It’s for people who like music. Vinyl records are for people who enjoy the physical interactions they have with the music. One way isn’t better than the other, they’re just different. And it’s entirely possible to enjoy both in different ways.

1There are automatic record players that do all the “hard stuff” for you. I recommend against them. The main reason for using vinyl is the experience, so why throw half of it away?